What is the industry collectively building towards?

A lot has happened over the last 10 years…Bitcoin, Ethereum, token standards, stablecoins, DeFi. The amount of innovation is staggering, but how does it all tie together? What is the industry collectively building towards? I like thinking about these questions, because the answer is the key for how to think about and organize everything that comes next.

The answer is infrastructure.

Over the last decade, all the tinkering, developing and infusion of venture capital has produced new financial infrastructure native to the Internet. This is a big deal. You see, finance didn’t exist on the Internet before 2009 (aka Bitcoin). But I have online banking, isn’t that finance online? No, online banking is a projection of assets and accounts that exist offline in your bank’s internal system. But what about when I pay with my credit card on Amazon? No again. When you enter your credit card number on Amazon, you are authorizing Amazon’s bank to request payment from your bank. The Internet doesn’t move money…it moves messages about moving money. That’s it. Since the 1990s, our financial system has used the Internet largely as a faster messaging layer.

This is changing. The last 10 years represent the first innings in a game that will see our financial system move from one technology infrastructure to another, turning the Internet from a faster messaging layer into a transactional layer.

Let’s take a look at how this new financial infrastructure developed.

For the Internet to natively support finance, it had to solve what I call the “scarcity problem”. Financial assets like money and stock derive their value primarily from the fact that they are scarce, existing in a finite number. Replicate them infinitely and you will immediately and permanently destroy their value.

Contrast this with content, which makes up 100% of the Internet. Everything on the Internet is one of five things – Text, File, Image, Audio or Video. This is not an accident. The Internet was originally conceived in the 1960s as a global communication network that could survive nuclear war, built to do one thing very efficiently - transmit information from point A to point B. It does this by copying and distributing data from servers through fiber optic cables to your computers and phones. This “copy and distribute” mechanism is great for viewing webpages, sharing pictures and streaming video because their value is that they can be consumed. Do this to financial assets though, where value is tied to a specific quantity (i.e. scarcity), and the value is destroyed.

In short, what makes the Internet so good for content, is what makes it so bad for finance.

Enter blockchains. Blockchains do two things really well – they maintain the supply of something, and they keep track of who owns what at a particular time. Blockchains solve the scarcity problem by being the ledgers for the Internet. 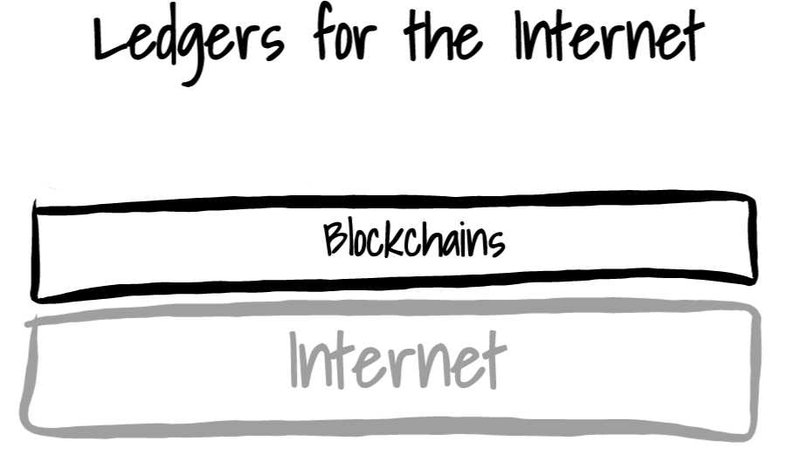 Now that we have ledgers for the Internet that can manage supply and ownership, we need assets. From 2009 – 2015, if you wanted to create a new digital asset, it meant creating an entirely new blockchain (i.e. a new ledger). All blockchains were single asset.

Ethereum was the first true multi-asset blockchain. And when you have a blockchain that can support multiple assets, it’s not surprising that a standard develops.

ERC20 is the fungible token standard, and if you ask me, the primary culprit of the 2017 bull market. The number of digital assets increased from approximately 600 in 2016 to over 200,000 in 2018. 98% of those assets were ERC20 tokens on Ethereum. Standards destroy barriers to entry, and have a major impact on interoperability.

Shortly after ERC20 was released, a complimentary standard for non-fungible tokens was created – ERC721. Yes, other blockchains have token standards too, but they haven’t enjoyed the same adoption and impact as their Ethereum counterparts.

Collectively, these tokens standards form the second layer of public financial infrastructure on the Internet. 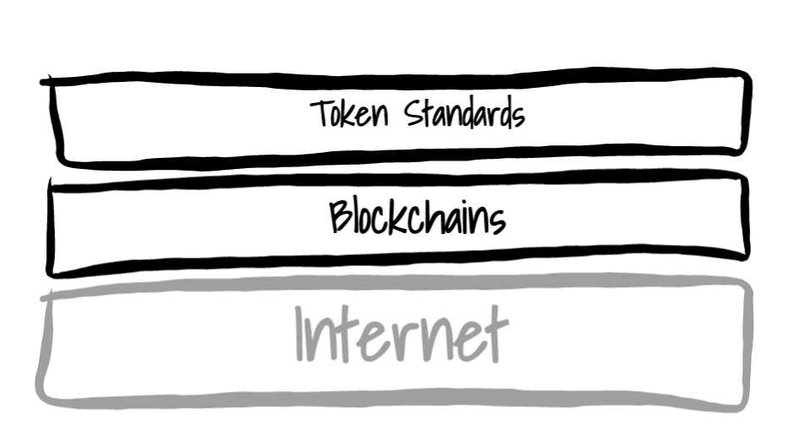 By 2017, the Internet had robust, multi-asset ledgers and well adopted token standards. But it still wasn’t obvious what this new infrastructure would grow up to be. We only had two layers of the stack!

It was also around this time that a few startups started using smart contracts to replicate some of the most common financial arrangements – central banking, collateralized lending, and asset exchange. These projects became the genesis of the third layer of infrastructure, now known as DeFi.

Practically, what you get as a user are financial products and services managed by smart contracts instead of companies. 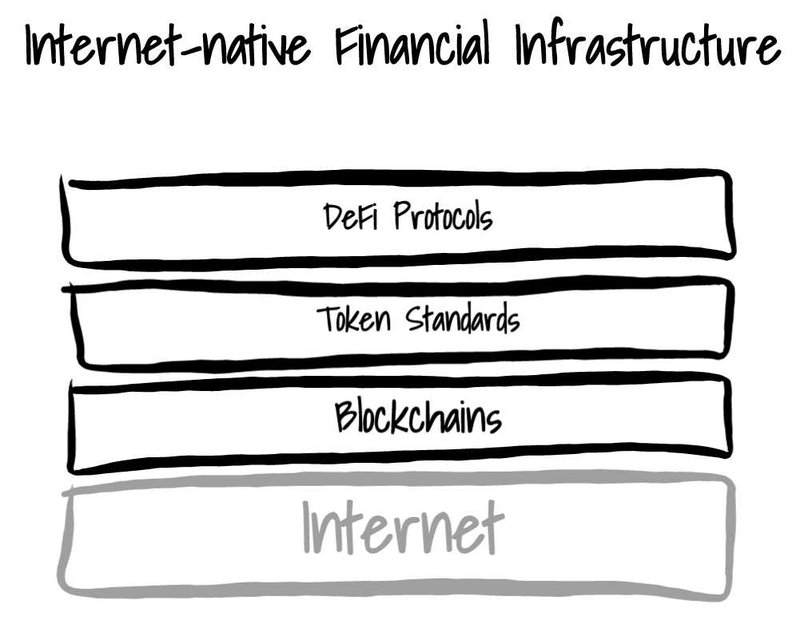 This is the new playing field, and there is a growing list of companies on top. Coinbase, Binance, Kraken, Gemini, Square, Paypal, Fidelity and many others have already planted their flag. EVERY other bank and fintech are on their way.

Not surprisingly, right now the industry is replicating the products and services that existed on the old infrastructure – exchanges, custodians, lending platforms, etc. But the real fun begins after innovation on this new infrastructure is allowed to compound over more years. You need smart phones and GPS before you can have Uber.

Because this infrastructure is on the Internet, it adopts all the characteristics of the Internet – global, public and 24/7. The rules are different, and finance will be different too.

This article was first published in Andrew's newsletter: 30000feet