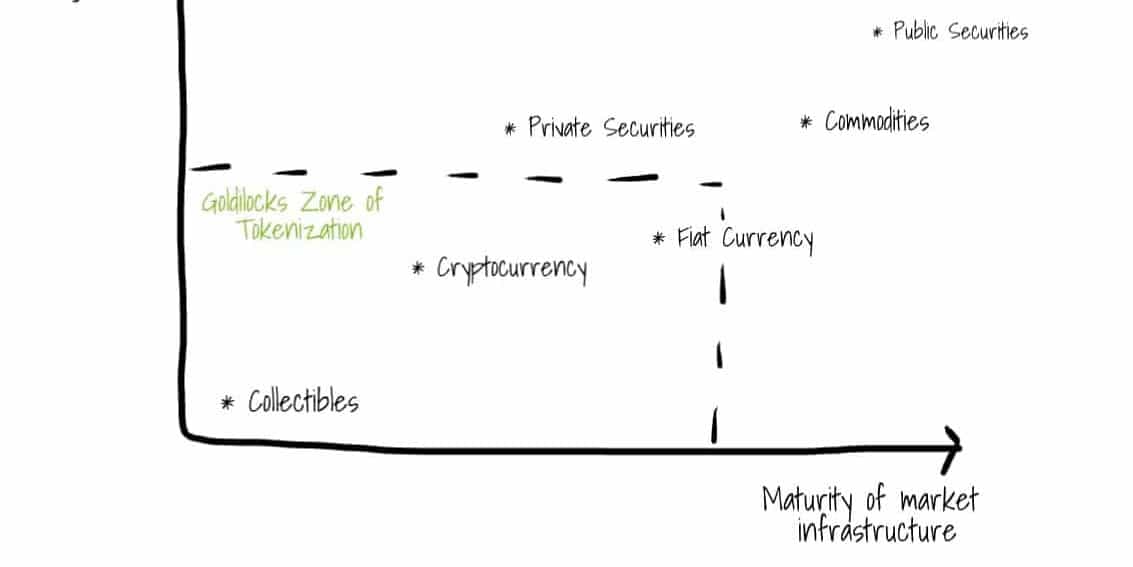 When I joined EY’s Blockchain Team in 2016, we had a saying that “everything that can be tokenized, will be tokenized”. If you zoom in closely on my Linkedin profile picture, it’s also the phrase that appears on the powerpoint slide behind me. 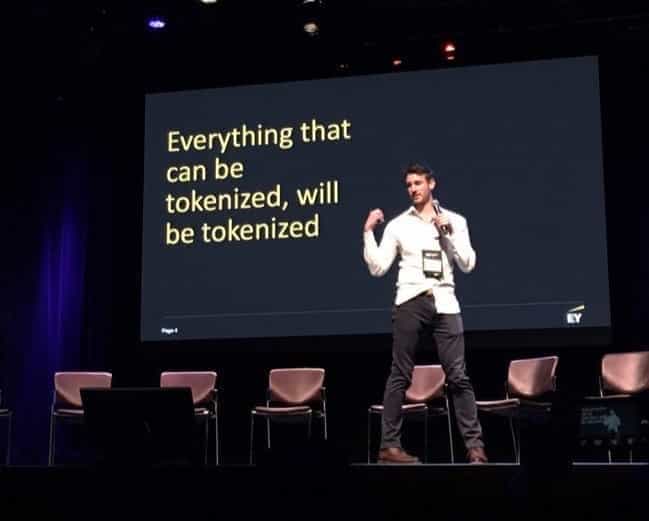 It was a catchy “bumpersticker phrase” that represented our belief that everything would be tokenized on blockchains one day. I had a strong conviction about this, but the “why” wasn’t something I could clearly articulate back then. What is the benefit of tokenizing something?

The Internet + Blockchains + DeFi collapse dozens of asset-specific financial market infrastructures into a single technology stack, and the rules of that stack require assets to exist as tokens. Therefore, everything that can be tokenized, will be tokenized, if it wants to leverage this infrastructure.

Asset-specific Infrastructure, or None

In our financial markets today, the large asset classes have their own market and technology infrastructure:

There are also a lot of other assets, like collectibles and intellectual property, that historically haven’t had any infrastructure to support them.

So here’s the landscape: 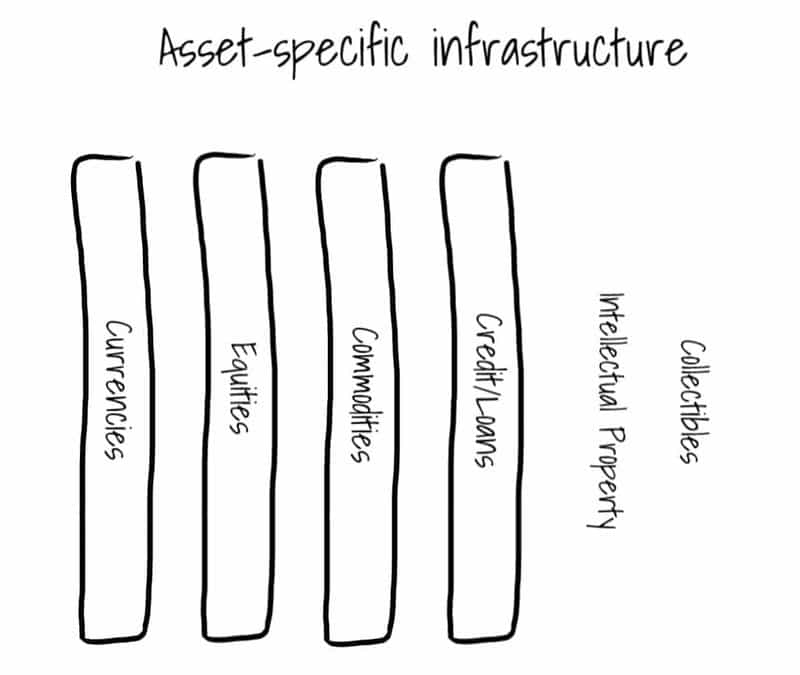 Think about that. A single financial infrastructure for any asset!?

As I discussed above, US Dollars and shares of publicly traded stock exist and move on two completely different technology stacks, and other asset classes don’t have any infrastructure supporting them at all.

Now, we have transformed the Internet into financial infrastructure that can simultaneously support cryptocurrencies, stablecoins, NFTs, tokenized public company stock, commodities, and dozens of other assets.

This new infrastructure doesn’t natively support every asset. It supports tokenized assets. Once an asset exists as an ERC20 token for example (the Ethereum token standard for fungible assets), the asset has access to the infrastructure and financial markets built on the Ethereum blockchain. It doesn’t matter whether the token is a cryptocurrency, or represents a bar of gold or one US dollar. (Side note - this is why token standards are such an important element of blockchain infrastructure. They make it incredibly easy to tokenize a new or existing asset, and ensure that the asset can be supported). 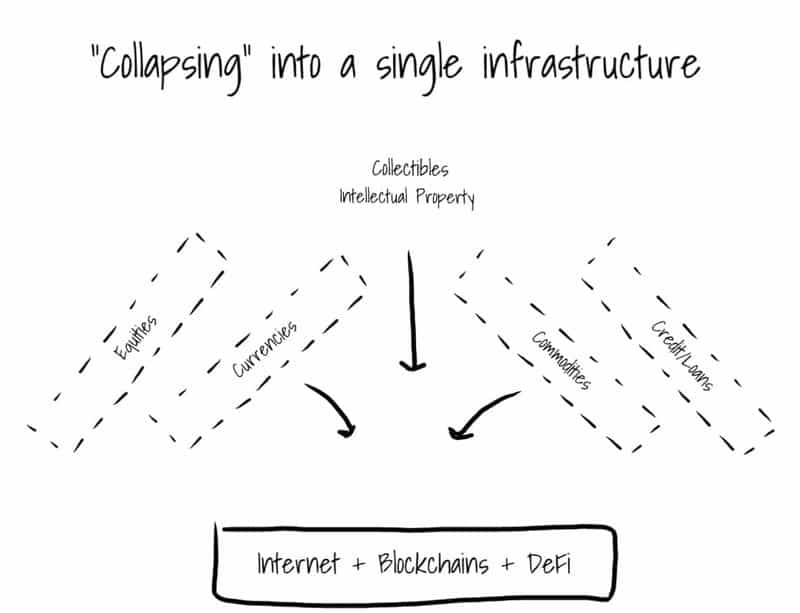 Music distribution is a great analogy for crypto. If you are a musician today, there is a big incentive to distribute your music digitally. Distribution infrastructure, in the form of Spotify, iTunes, and other download and streaming platforms, exists to help artists distribute their music digitally. These platforms have aggregated all your listeners and potential listeners in one place. They’ve built a marketplace around supply and demand for music. Music = supply, and listeners = demand. These platforms have a gravitational pull on new music.

For an asset, particularly one with little or no financial market infrastructure today, there is a big incentive to tokenize on a public blockchain. It gets immediate access to a global financial infrastructure.

Not only does a tokenized asset get access to infrastructure, it also gets access to the ecosystem of products and services built on top of that infrastructure. Exchanges, custodians, lending platforms, wallets, derivatives, etc. It’s all there, as long as you are a token. Just like Spotify has a gravitational pull on new music, the financial system emerging on top of public blockchains (particularly Ethereum) has a gravitation pull on assets.

Not all assets will be tokenized and put on blockchains at the same time. There are a few factors that impact when an asset class is likely to be tokenized: switching cost, and regulation.

Assets with existing, mature financial infrastructure have a higher cost of switching to something new. A ton of time and money is locked up in the old system. Switching, even to something superior, is painful and expensive, and for something like publicly traded stock, requires a lot of industry coordination.

Switching cost is the reason why cryptocurrencies and NFTs make up almost 100% of the assets on public blockchains today. There is no switching cost for these assets because they are brand new.

Here is a graph showing how different asset classes compare on these two factors. Asset towards the bottom left will have an easier time moving to blockchains. But eventually, they will all get there. 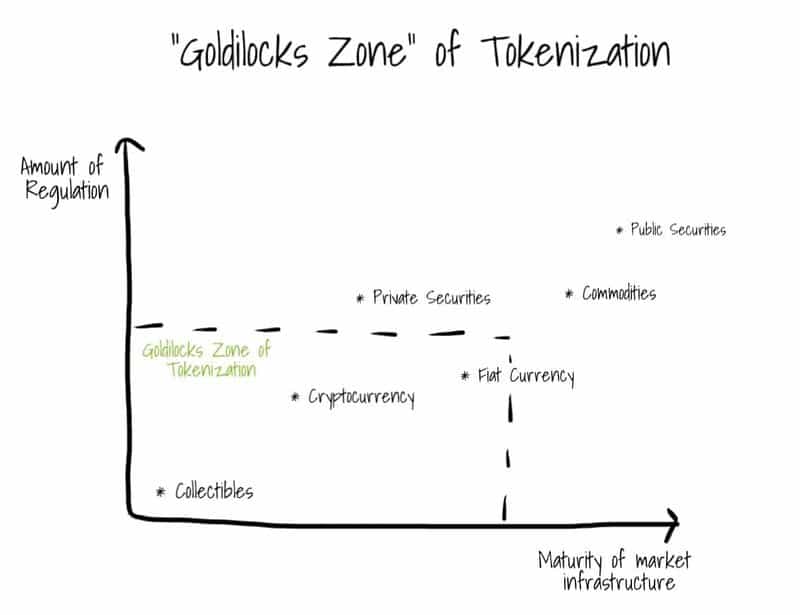 “Goldilocks Zone” is a reference to the habitable zone around a star where the temperature is just right - not too hot, not too cold - to maintain liquid water, which is essential for life.

Switching cost is the reason why the US is ten years behind Southeast Asia and Australia in payments technology. We are burdened by an old system that still supports physical checks and swiping a plastic card. Everywhere else is “tap and go”.

It’s also the reason why parts of Africa were able to leapfrog dial up internet and land line telephones and go straight to smart phones and WiFi. They weren’t burdened by large, clunky existing physical infrastructure.

I often hear blockchains compared to Visa or the DTCC from a transaction volume standpoint. But how we should really be thinking about them is in terms of Visa, Mastercard, Discover, American Express, DTCC, CME, NYSE, Nasdaq, Western Union and other infrastructure providers combined.

Two thoughts to close this out…

First, this is why scaling and Layer 2 solutions are so important. The industry is trying to build a single financial infrastructure for EVERYTHING, and that requires throughput equivalent to all the companies listed above and then some. It would be very challenging for a single ledger to keep track of every asset transaction on the planet.

Second, while I intentionally stay away from talking about specific assets or investments in this newsletter, we are watching public blockchains slowly absorb the assets, transactions, users and market capitalization of these asset-specific infrastructure providers. Public blockchain infrastructure collapses all of those separate pieces into one technology stack, and you can own a piece of that technology stack.

You couldn’t buy the Internet in 1995, but you can buy blockchains and DeFi protocols today. You can own the new global financial infrastructure.

This article was first published in Andrew's newsletter: 30000feet