The Long Tail of Financial Markets

In 2004, Chris Anderson, then the CEO of Wired Magazine, wrote an article called the “The Long Tail” popularizing the theory that the Internet’s natural economies of scale allow companies to profitably sell niche products with low volumes (the long tail), where before, they were only focused on selling large quantities of the most popular products (the head).

For decades, companies were limited to selling products that had broad appeal because there were inherent constraints and fixed costs, mainly that distribution and inventory was expensive. Retail stores only have so much shelf space, so they stock products they know most people will buy. Radio stations only have so much air time and survive on ads, so they need to prioritize the most popular songs to maximize the number of listeners. Theaters have physical space constraints and prioritize movies they know will attract the most people. They want the biggest bang for their buck, and who can blame them.

The Internet changed that dynamic by making it more cost effective to support the long tail. For media in particular, the Internet brought distribution costs down to nearly zero, making it profitable to support niche content. We now have websites dedicated to obscure corners of pop culture, musicians that can sustainably provide music to their 1000 true fans, and e-commerce marketplaces like Amazon supporting the long tail of consumer products. 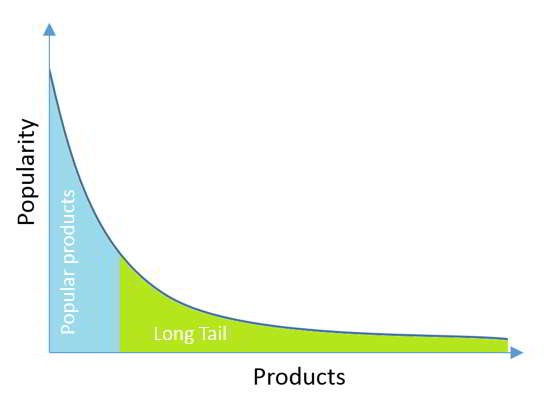 The bulk of the consumption still happens at the “head", but the Internet and platforms like Spotify, Youtube, Amazon and Substack make it possible to survive in the long tail (and in my case, the veeery end of the long tail).

The same thing is happening with assets.

This growth was due to two things:

Now the vast majority of the 500,000 have no value and aren’t widely held. But, I highlight this to demonstrate that the barriers to creating new digital assets are being removed. It’s getting easier and cheaper.

The long tail of assets is forming, and the trend will continue. 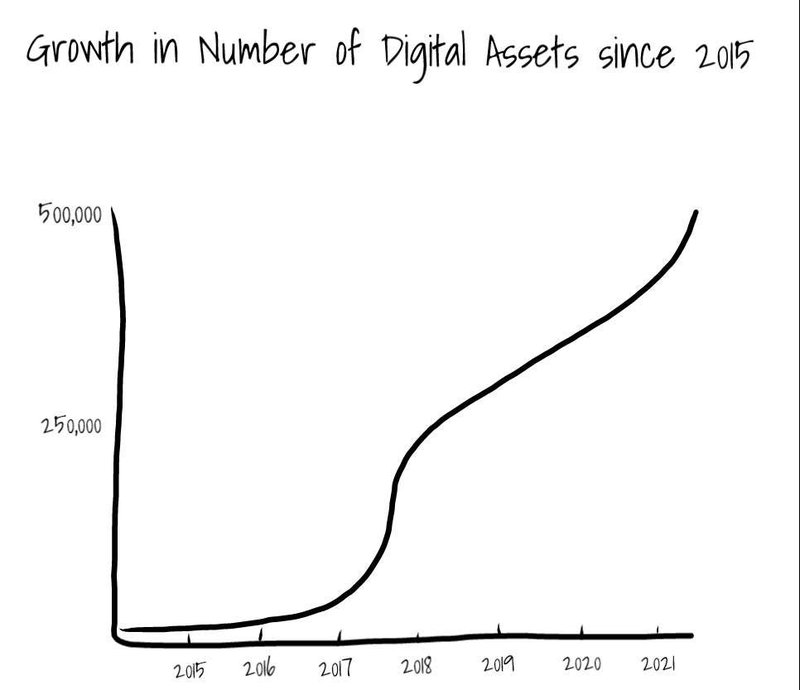 Have you ever thought about the investment opportunities available to you? For most people, there isn’t much variety. You can buy stocks, bonds, index and mutual funds, and real estate. If someone has an investment portfolio, 99% of the time it is made up of these assets.

While the investing experience has changed a lot over the years, the choices haven’t changed much at all. Until recently, my generation and my parent’s generation invested in the same types of assets.

And this is just the tip of the iceberg. The low hanging fruit. For the foreseeable future, there will be a Cambrian explosion of new digital assets in almost every industry. The industries most likely to generate the bulk of new assets are finance, gaming (metaverse/virtual reality) and media (social, entertainment, IP).

NFTs are being used to represent ownership of in-game items like avatars, clothes and weapons. Because these items live outside their respective games, on blockchains, they now become an asset in the crypto economy. These NFTs can be bought, sold, borrowed against, lent out, even grouped together and securitized. This blurs the lines between virtual reality and the real world, because the assets in each transcend their previous boundaries. Virtual real estate now has a market value outside the game. Rare avatars have a market value outside the game. This adds millions of new digital assets to the pool, and introduces an entirely new vertical of investable asset to the financial markets.

The Long Tail of Financial Markets

In some ways, the existence of a financial market for something is what makes it an asset. If you can’t assign a dollar value to something, and it can’t be part of a financial transaction, is it really an asset?

This is exciting because it means the creation of hundreds of mini-financial markets for even the more obscure things. Every thing has a market price and can be an input in a financial transaction.

In theory, this should means things are more efficiently priced and transacted, even in the long tail.

If this plays out like I’ve predicted above, everything becomes an investable asset, tradeable in a marketplace with a market price. We are essentially taking the barter economy, and stacking financial market infrastructure on top.

Most people will hold the most common, accessible assets, but there will be a long tail because the cost of creation is low and demand is there.

This will create enormous value for a lot of people, and especially the platforms that enable and capture this activity.

There is a downside to the “financialization” of everything though. We start assigning a dollar value to everything thing, decision and interaction. Since everything has a value, our decisions becoming increasingly based on whether that decision is smart financially.

Just like we’ve lost some of our humanity to smart phones and social media, I worry we will lose more of it when everything is optimized for the best financial outcome.


The Future of Sustainable Finance DAOs, Reputation and the Future of Work Web3, DeFi, and what Fintech investors liked last year 4 Ways the FinTech Industry is Helping Farmers Fintech and the Metaverse: The Possible Connections Between The Two Major Tech Sectors “Buy Now, Pay Later” Struggling in 2021 After Major Success during the Pandemic

Oct. 12, 2021 • Samuel Feldman
Thanks to advances made in fintech, social trading is now possible in the traditional and crypto markets, embodying a growing facet of investing.
Read more »

The changing role of the CFO

Are NFTs a Money Laundering Gold Mine?

Oct. 6, 2021 • Richard Paxton
The bad actors are looking for the ways that are most likely for them not to be caught
Read more »

Oct. 5, 2021 • Samuel Feldman
An expected move from China has crypto investors scrambling in uncertainty as they wait for the world to react.
Read more »