Bank Branches Are Not Dead, But They Do Have to Change

An outlook on bank branches

In her excellent new autobiography Anne Boden describes a visit to a bank branch in Australia, which is relayed as one of the experiences that inspired her to found the branchless digital bank Starling. She describes an empty branch “devoid of customers”, save for a solitary sole-trader popping by to deposit his cash takings who “didn’t have time to lounge around” or to enjoy the “smart colourful carpets and plush new sofas”.

It’s a scene many of us will be familiar with, and one which many fintech leaders (including Boden herself) have confidently predicted presage the inexorable ubiquity of digitalisation. But leaving aside the obvious vested interest in these predictions, are they right? Is the humble bank branch on borrowed time and doomed to oblivion? 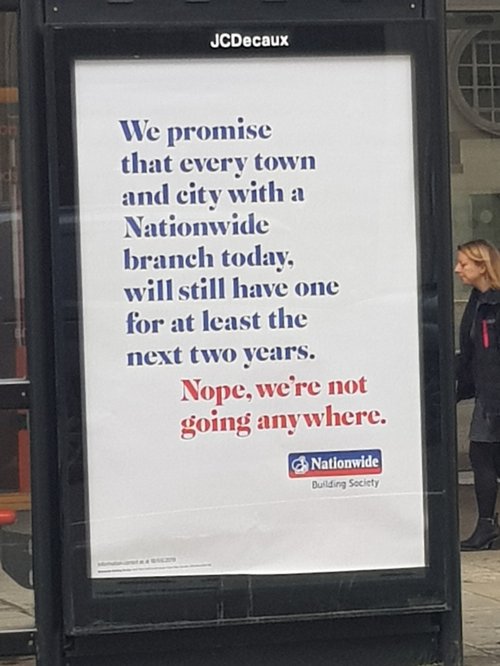 Well, not quite. Nationwide recently won the Which? best banking brand of the year for the fourth year in a row, and has been the undisputed winner of the Current Account Switch Service for some time, gaining more than half a million customers from this route alone. The world’s biggest building society has done so on the back of a large branch network that has undergone an extensive modernisation program in recent years, and which the lender has promised to protect by ruling out last bank in town closures for at least the next two years.

Another success story is Metro Bank, again an award winner, this time “Bank of the Year” according to the MoneyAge Awards. Metro Bank has been in the news for the wrong reasons lately, with its issues around lending records and risk weighted assets triggering a C-Suite reshuffle and an urgent yet ultimately successful cash-raising drive. Yet despite these problems, Metro Bank was still committed at the beginning of 2020 to opening 24 new branches over the next three years, and saw this not as conflicting with its problems but indeed as a means of actually solving them:

“We've fully evaluated our strategy and have a clear plan which will return the bank to sustainable growth built around a community banking model. An enhanced focus on costs, improved productivity, and investment in our infrastructure will enable our deposit-led franchise to deliver profitable growth over the medium term.” A spokesperson reportedly said. In other words, branches are central to their strategy of returning to profitability.

There are other success stories too. Handelsbanken has consistently reported some of the most consistent financial results for the last decade and is fully committed to a branch-based relationship banking model, as outlined by their CEO after strong results in Q2 2019:

“At Handelsbanken we say that the ‘branch is the Bank’ because our branches are the home for the long-term, personal relationships we form with our customers… We are currently investing in our UK business, building capabilities and further capacity to embark on the next stage of our growth. At the heart of this evolution, remains a firm commitment to our distinctive branch-based model.”

Of course, a lot has changed since 2019, not least the global pandemic reducing bank accessibility (across all channels), and social distancing reducing the number of customers that can be served in person at any one time. But despite this, long queues outside bank branches have been a common sight on high streets throughout the pandemic, and there is data to support this anecdotal evidence.

In a new survey conducted by Opinium for Avon Mutual and South West Mutual,[1] 29% of people said they visit a bank branch at least once a month outside of lockdown periods, the industry standard definition for a “regular branch user”. Even more interesting was the fact that, contrary to popular belief, there was no significant variation by age – Millennials and Gen Z customers were just as likely as other age groups to visit the branch regularly, despite being “digital natives” who are supposedly addicted to their phones and are commonly – though wrongly – thought to eschew bricks and mortar. 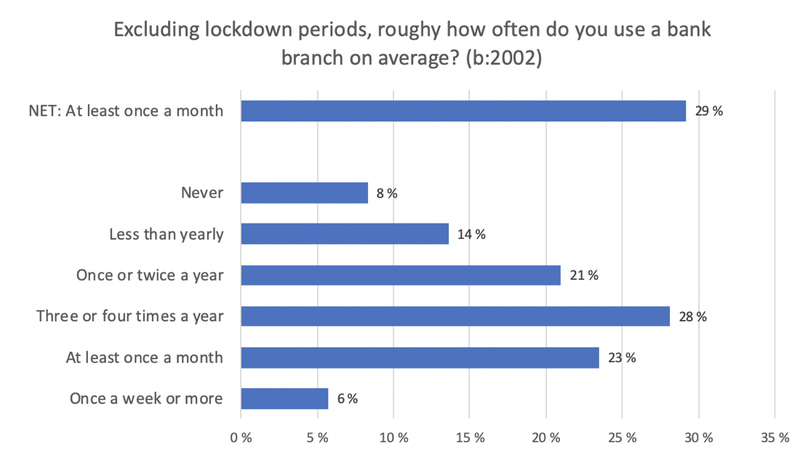 And this finding seems “sticky” – the 2017 Financial Lives Survey conducted by the FCA, the largest and most detailed study of individuals’ financial behaviours in the UK, also found that 26% of people used a branch regularly, with younger groups even more likely than the average to use branches regularly.

Meanwhile, an increasing number of fintech brands are making partnerships with the Post Office and PayPoint to enable their customers to deposit and withdraw cash and do simple banking tasks in physical locations – a function that is otherwise undeliverable for digital-only brands. And new innovations and services based on open banking technology, such as OneBanks, are increasing the number of ways and locations that people can interact with their financial providers through a physical experience.

So the picture seems less clear cut than fintech leaders or media commentators might have you believe. That said, the rise of digital channels and commensurate decline in physical ones (along with cash usage) is undeniable, and has accelerated exponentially over the last ten years. Branch networks are shrinking rapidly, particularly those of the established brands that are encumbered with expensive prime real estate and expansive (and expensive) legacy networks.

Yet these are issues that have long been recognised, and the industry has been talking about branch network “rationalisation” and modernisation programmes for at least the last decade. New bank branch concepts have sprung up with increasing frequency. The latest trend du jour is around “phygital” banking, or in other words greater integration between digital and physical channels, through augmentation of branch spaces and customer service experiences with digital technologies and innovation.

All this points clearly to a future that is both digital and physical, rather than the triumph of one over the other. And the most successful financial brands will be the ones that can deliver useful, relevant, and impactful services for their customers across a range of integrated channels, including physical spaces that enable real-life interactions and help build trusted relationships. Put simply, customers may not be so interested in the colour of your carpets or the plushness of your sofas, but the desire for and utility of genuine human connection is as strong as it ever has been. Financial brands would do well to embrace this reality in the post-pandemic, digitally integrated world.

Fionn Travers-Smith is the Head of Culture and Customer Strategy at Avon Mutual, a new regional community bank for Bristol and the West of England. He specialises in impact measurement, market analysis, and service design for financial service providers, and has published research with the RSA, New Economics Foundation, and Move Your Money on a variety of banking and finance issues.


What Does 2023 Hold For The Banking Sector? Bank transformation: implementing real-time payments made easy Managing risk capability in financial organizations The Rise of Tokenized Deposits Top 5 Cost Reduction Strategies That Are Driven by a Streamlined Banking Procurement Process BaaS — Banks’ Answer to Fintech