Tapping network as a competitive advantage

A bank with more than 200 million retail customers, 1.7 million corporate customers, annual revenue of more than US$2 billion, and a bank that handles more than 500 million transactions per day but do not have a single physical branch. Also, it took them only 5 years to reach this scale. Oh!, the bank managed to do this with negligible customer acquisition cost and a record low cost per account of around 55 cents.

This is Webank微众银行, the first privately-owned bank in China founder in late 2014. This article is on the fascinating story of WeBank, how they leveraged technology networks as strategic growth channels and what it means for the future of banking.

A look under the hood

How did Webank manage to grow so fast?

WeBank was founded by Tencent Holdings which is one of the largest tech companies in China. Tencent controls two of the most successful chatting applications in the world - WeChat and QQ. WeChat has monthly active users of more than 1.7 billion (yes, billion) and QQ has monthly active users of more than 650 million. WeBank leveraged the traffic and engagement in these chat apps to acquire customers. But ,how? 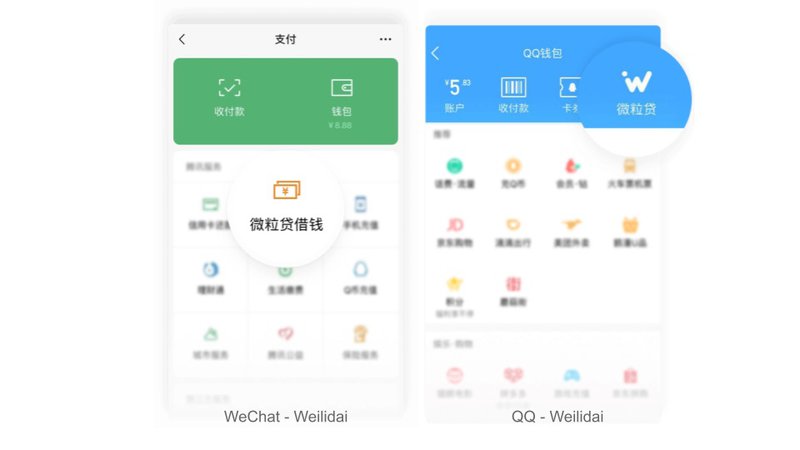 In short, the primary growth strategy that WeBank used is embedding financial services on technology platforms with high traffic and engagement. The pre-underwriting and AI-model-driven loan approval give them lightning-fast execution.

How do they keep the costs so low?

As WeBank does not have any physical branches, it does not incur any branch network-related costs.

Now, coming to human resources cost. WeBank uses cutting edge technologies such as Machine Learning (AI), Big Data, and Blockchain to handle operations at scale at a significantly low cost. As already mentioned, the loan approval process is completely AI-based without any human involvement. AI is also used for customer service. As per the CIO of WeBank, they handle more than a million inquiries per day and 98% of them are handled by AI.

Is this model portable?

WeBank proved that this model works well in serving a low-income and financially underserved customer base. For example, the per head revenue for WeBank in 2019 was merely 74 RMB (US$11.3). The ticket size of retail loans is around 8K RMB (US$1.2K) and for SME loans around 200K RMB (US$30K). We also need to note that the per capita GDP in China is merely around US$10K.

So, can this model be replicated in other markets?

Enter Kakao Bank. Kakao Bank is a South Korean Neobank launched in 2017. The per capita GDP of South Korea is around 3 times that of China. Similar to WeBank, Kakao Bank leveraged a chat app named KakaoTalk of the parent company Kakao Corp. Kakao Bank enrolled 300K subscribers within 24 hours of launch and 2 million subscribers within 15 days. As of the end of 2020, Kakao Bank had more than 13 million users. We should note that the population of South Korea is a little more than 51 million. That means that a quarter of the South Korean population is already Kakao Bank customers and that took just 3 years. It is noteworthy to mention that although Kakao Bank promised to extend credit to low to mid-credit borrowers, in reality, Kakao Bank focused on high creditworthy borrowers. By the end of 2020, the bank has reached a loan book size of 20.3 trillion KRW (US$17.94 billion). The operating income for the bank stood at ~US$708 million with ~US$100 million net profit in FY2020. From the 2020 numbers we can calculate an average revenue of US$54.5 per customer i.e. around 5 times that of WeBank in 2019.

The rapid growth of Kakao Bank shows that the model can be replicated for a fairly different customer segment.

The broader implication seems to be that any technology platform with significant engagement can enter the financial services industry and gain market share fairly quickly. For legacy banks and financial services, this means that the market status quo can change very rapidly giving them no time to adapt.

Consider Whatsapp which already entered payments in Indian and Brazil. Whatsapp has more than 2 billion monthly active users around the world and can become an indomitable threat to legacy banks.

So, what is protecting the legacy banks? Well, regulations.

As we saw in the case of Whatsapp’s struggle with regulators in India, entering financial services for technology platforms may not be as simple as it looks on the surface. Payments are generally far less regulated than other banking services such as credit or deposit services. So, regulatory complications obviously will buy some time for the legacy players.

On the other hand, regulations such as PSD2 and open banking are making holes in the fortresses of legacy banking. Open Banking regulations are going to make it much easier for technology platforms to collect customer financial data in a much more efficient and cost-effective way.

From a strategic context, as open banking culture spreads, data is going to become less and less important as a strategic advantage and networks become more and more strategically important in the financial services industry. Given the fundamental nature of tech companies, they have a far more network advantage than banks and other financial institutions. Regulatory moat can delay but not deny the shift in the financial services industry.

Sam Ghosh is an engineer, holds an MBA from the University of Calgary, Canada, and Passed all three levels of the CFA Program. He has been an entrepreneur in the FinTech domain and interested in emerging industries and emerging technologies. In his free time, he likes to run and travel.
Linkedin


Bank transformation: implementing real-time payments made easy Managing risk capability in financial organizations The Rise of Tokenized Deposits Top 5 Cost Reduction Strategies That Are Driven by a Streamlined Banking Procurement Process BaaS — Banks’ Answer to Fintech What is Banking As a Service and How is it Different From Open Banking