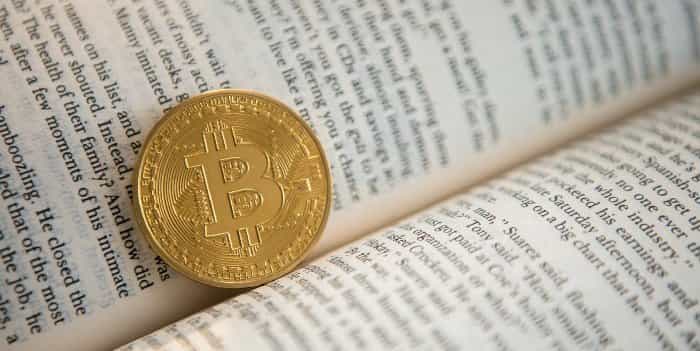 Why there is no reason for investors to delay studying bitcoin. And why bitcoin literacy will pay whether you plan to invest or not.

Understanding Bitcoin involves a rather lengthy process that requires doing your own research. But this process can be very rewarding, not only regarding financial returns. However, many investors don’t even start this learning journey because of stereotypes they hold towards bitcoin. Here is an analysis of two of the main concerns people have — criminal activity and regulatory ban — so they don’t stop you from getting started.

With a price exceeding USD 50k and a market capitalization hitting the USD 1T mark, bitcoin is getting harder and harder to ignore. The mother of all digital currencies is establishing itself as an asset class among institutional investors who want to hedge against growing inflation. Two of the most prominent public examples are Microstrategy and Tesla, with billion dollar investments in bitcoin. More important are the financial giants with trillions of US dollars of assets under management e.g. Blackrock and Fidelity who have embraced bitcoin as well. Even traditionally conservative investors have started investing in the digital currency. Examples include the insurance company MassMutual, Ivy League university endowment funds of Harvard, Yale and Brown or the City of Miami. One might ask: If they are buying bitcoin, why isn’t everyone?

The truth is that bitcoin and its mechanisms are not easy to understand. “Studying bitcoin is akin to learning the alphabet”, says Professor Philipp Sandner, founder and head of the Blockchain Center of the Frankfurt School of Finance and one of Europe’s top bitcoin experts. It requires substantial self-study in order to learn enough letters of the “Blockchain” or “Bitcoin Alphabet” until you can start to “read” and understand the interrelationships. In order to motivate you to start your learning journey, I will explore some of the rewards you can reap. But first, let’s tackle two of the biggest concerns that investors cite as an excuse not to dig deeper into bitcoin: criminal activity and the regulatory risk of a bitcoin ban.

The narrative that cryptocurrencies are mainly used for illicit activities persists even among the most prominent decision makers. In January this year, Janet Yellen, the new U.S. Treasury Secretary, at a Senate hearing, said that “Cryptocurrencies are a particular concern. I think many are used…mainly for illicit financing and I think we really need to examine ways in which we can curtail their use and make sure that money laundering doesn’t occur through those channels”. Also, Christine Lagarde, the president of the European Central Bank (ECB), was quoted referring to bitcoin as “funny business” and as a “totally reprehensible money laundering activity”. Both statements have vastly been criticized as being inaccurate. So let’s look at the numbers.

As the Financial Times reported in December 2020, the six largest US banks alone have paid close to USD 200B in fines and penalties for misconduct since 2000. USD 200B! That is greater than the entire market capitalization of bitcoin for most of 2020, until the price started to rally in late October. Given that bank fines have increased even after the 2008 financial crisis and since sanctioned practices tend to continue as long as wins are larger than fines, I leave it up to you to imagine the extent of illicit practices among the above mentioned banks alone.

Clearly, most financial misconduct happens within the traditional financial system. But let’s take a closer look at cryptocurrencies. Crypto crime is in fact at a surprisingly low level. The blockchain analytics company Chainalysis wrote in its 2021 Crypto Crime Report that in 2020, the criminal share of all cryptocurrency activity fell to just 0.34% (USD 10B) in transaction volume, including scams, hacks, ransomware attacks, darknet markets, and terrorist financing. 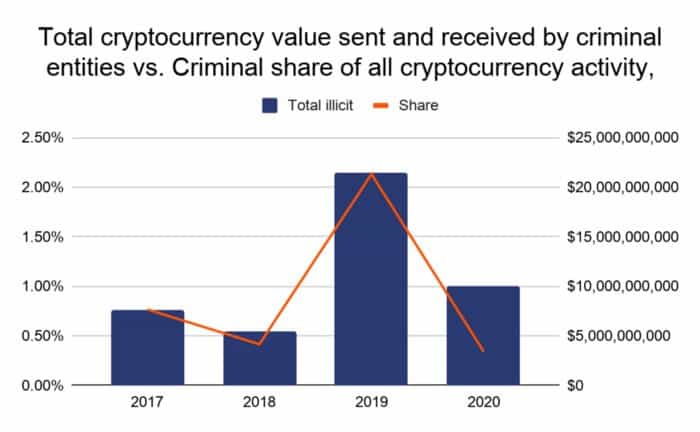 While the overall number of bitcoin transactions is skyrocketing, the attractiveness to criminals is low and even declining. On-chain transactions that are recorded directly on the Bitcoin blockchain are contrary to widespread belief not anonymous but pseudonymous. Your address is your pseudonym. And with enough effort, it is possible to link the addresses to identities. Law enforcement agencies are increasingly willing (and able) to do so when serious crimes are committed. And since all transaction data is publicly available and immutable on the blockchain, it creates the ultimate paper trail for them. Bitcoin laundering tools (mixers or tumblers) that were created to break the paper trail are also not able to fully erase the traces. They are limited in terms of larger volumes and can often be identified on the blockchain. The majority of bitcoin transactions, however, are happening off-chain, not touching the Bitcoin blockchain one by one but only in aggregated form e.g. at centralized exchanges such as Binance and Coinbase. These providers are mostly regulated and have anti-money laundering measures including KYC (Know Your Customer) in place.

Given its relatively low share of illicit activity and its solid technological design, bitcoin seems less and less scary the deeper you dig into the matter. In its National Risk Report, the German Ministry of Finance evaluated the money laundering threat posed by cryptocurrencies as moderate to low and recognized that other means of payment, in particular cash, are better suited for laundering money. Perceptions are increasingly changing. Also Janet Yellen seems to be on this path. Shortly after her above mentioned cryptocurrency comments made headlines, she felt compelled to clarify her position in a written statement, which includes some warmer words: “I think it is important we consider the benefits of cryptocurrencies and other digital assets, and the potential they have to improve the efficiency of the financial system.”

Another persistent narrative is that bitcoin runs the risk of being banned in major markets such as the US or Europe. Given the former comments by Yellen and Largarde, it would not be a far-fetched conclusion. However, bitcoin seems far too established to be banned. For one, it is impossible to keep people from using bitcoin as it is decentralized and cannot be shut down by a government. Second, too many influential individuals and companies are already invested in bitcoin. A ban would therefore be unattractive to a government and also be seen as stunting innovation.

While bitcoin is illegal in a handful of countries (e.g. Bolivia or Vietnam) and the list might grow, the general trend is the opposite. Even in China, where the country’s relationship with bitcoin is complicated and exchange with fiat money remains illegal, the cryptocurrency can be legally owned and traded between individuals. Across the globe, bitcoin is becoming increasingly regulated, which creates higher legal security for related activities. The European Union, for instance, is formulating “Markets in Crypto Assets” (MiCA), an EU-wide regulatory framework covering bitcoin and other digital assets. It will be complemented by several national regulations. In Germany, for example, the custody of bitcoin and other crypto assets has recently been regulated and high standards for providers of custodial services (safeguarding of private keys) have been introduced.

In the United States, the regulatory environment is looking increasingly favorable for bitcoin. While then President Trump tweeted in 2019 “I am not a fan of bitcoin”, he appointed Brian Brooks as acting Comptroller of the Currency (OCC) who was previously the legal council of crypto exchange Coinbase. Brooks did not hesitate to state “nobody is going to ban bitcoin” and clarified that US banks are allowed to provide custody services for cryptocurrencies and can use stablecoins and blockchain to process payments. Further notable bitcoin friends from the Republican party include Kelly Loeffler, former Senator of Georgia who used to head the cryptocurrency exchange Bakkt and Cyntia Lummis, Senator of Wyoming, who pledged to help fellow members of the U.S. Senate understand bitcoin.

What about the Biden administration? As we learned, US Treasury Secretary Janet Yellen, while still somewhat cautious, increasingly appreciates the benefits of cryptocurrencies. But let’s take for instance a look at Biden’s pick for SEC Chair, Gary Gensler. Gensler is not only bitcoin-friendly but also a true expert who taught ‘money & blockchain’ courses at the Massachusetts Institute of Technology (MIT) and is a member of the school’s Digital Currency Initiative.

Admittedly, even with criminal activity and regulatory concerns aside, bitcoin as a new asset class can feel strange. Due to our status-quo bias, we believe that the status quo is safe and whatever is different is potentially dangerous. Financial services giant Fidelity compares the acceptance of bitcoin in institutional portfolios with emerging and frontier equities in the late 1980s/early 1990s. The resistance to the inclusion of emerging markets was driven by concerns about factors such as volatility and liquidity. However, over time, investors recognized the growth rates and low correlations.

Bitcoin is expected to follow a similar path. The digital currency is a new asset class, still finding its market, and strong growth is rarely a linear process. Volatility will likely decrease with further adoption and liquidity is already high. Today, there are even bitcoin ETNs (Exchange-Traded Notes) on traditional stock exchanges and also bitcoin ETFs (Exchange-Traded Funds) have recently hit the market. Furthermore, bitcoin has very low correlation with other asset classes (see figure 2). Due to one of its key features, the built-in scarcity factor (total supply of bitcoins is limited to 21M), it is often compared to gold. Institutional investors wanting to hedge against inflation are discovering it as a store of value (see the first paragraph of this article). As we are early in the journey, there is massive growth potential. Bitcoin is therefore thought of as having asymmetric upside. If bitcoin continues on its growth trajectory, the upside may be significant compared to the upfront investment.

Figure 2: Bitcoin (BTC) and correlation with other assets, Fidelity, Bitcoins’s Role as an Alternative Asset

Bitcoin technology will drive the next technological revolution

Even if you do not intend to invest in bitcoin, your business will benefit from doing your own research on bitcoin and its technology. Bitcoin is the first application of blockchain technology and has proven to facilitate the trade of values without a trusted third party. The Bitcoin blockchain solved the double spending problem and has never been hacked. It heralded the age of the “Internet of Values”, which is supposed to have a similarly disruptive effect as the “Internet of Information” had over the last 25 years. Don’t make the mistake to look only at corporate, private blockchains. You will miss out on the disruptive innovation out there as cryptocurrencies are an integral part of the game. Decentralized Finance (DeFi) has already started to unbundle our banking system. Within a year, the total value locked in DeFi has exponentially grown to USD 40B. Though still in their infancy, decentralized competitors of today’s Internet giants such as Google and Amazon are already here. We are still early. In Internet terms, we are still in 1996 for blockchain. Imagine that you would have known in 1996 how large the impact of technology would be over the years to come? Would you have tried to learn everything you could about the technology to become “literate” and able to be an active shaper or at least winner of the change? If your answer is yes, here is your second chance.

So why not start learning the bitcoin alphabet with an introductory video by professional “bitcoin explainer” Andreas Antonopoulos and then continue with some lectures held by Joe Biden’s pick for the Chair of the SEC himself?

Susanne Fromm is an alumna of the INSEAD MBA program and of the DLT Talents program for female leaders in Blockchain. Experienced in implementing and investing in new business models & technologies, she is fascinated with the next technological revolution driven by blockchain.