Throughout years of global financial history, massive amounts of money printing in fiat currency systems have forced hyper-inflation problems to the forefront. After a certain point, infrastructures implode. However, not many people understand that hyper-deflation actually results in the same outcome - monetary implosion. In cryptocurrency, for example, many projects, including “memecoins,” intentionally burn (or destroy) tokens to prevent inflation and raise token prices. Some are burning such a high rate of tokens, it will eventually result in a total disappearance of the token supply within the next decade. Due to this lack of sustainability, deflationary tokens also lack real utility and as result, long-term investor participation.

Seeing a futile end in hyper-deflationary cycles, Austrian economists, libertarians, technology experts, and the DeFi Labs community, came together to create Cake Monster and combat the lack of intrinsic value in deflationary tokens as well as investor “hodling,” which leads to token monopolization.

There will be an initial supply of 10 billion $MONSTA native tokens with a minimum supply of 1 million. Cake Monster’s protocol runs in perpetual cycles building up a protocol-backing reserve called the Gravity Vault. The Gravity Vault contains $CAKE, a secondary asset that will act as a price anchor and function as a reward system for native $MONSTA token holders.

To prevent network implosion, if a wallet holds $MONSTA tokens without any activity (buying, transferring, or selling at least 5.01% of the total holding amount) for more than 50 days, the network can force that wallet to sell their tokens for BNB through an Auto Cashout function. In order to keep price stabilized, the Auto Cashout $MONSTA is 'sold' into the Pancake Swap liquidity pool for BNB, then the newly added $MONSTA in Pancake Swap is burned. There will be a minor impact on price due to less BNB in the liquidity pool but this expense ensures the protocol does not stagnate. This policy is an essential function in the hyper-deflationary logic of the Cake Monster protocol.

Cake Monster will be built on Binance Smart Chain and later integrate all leading smart contract networks that support an underlying reserve asset. Built with modularity in mind, every component of Cake Monster is upgradeable, which will allow replacements when better techniques and competing implementations emerge. Cake Monster ensures security with an audit completed by Solidity Finance.

A total of 600 BNB will be raised for 5 billion $MONSTA tokens on Starter beginning June 19. For more information or to join the whitelist, visit Cake Monster’s website and whitepaper or Starter’s official Medium page. 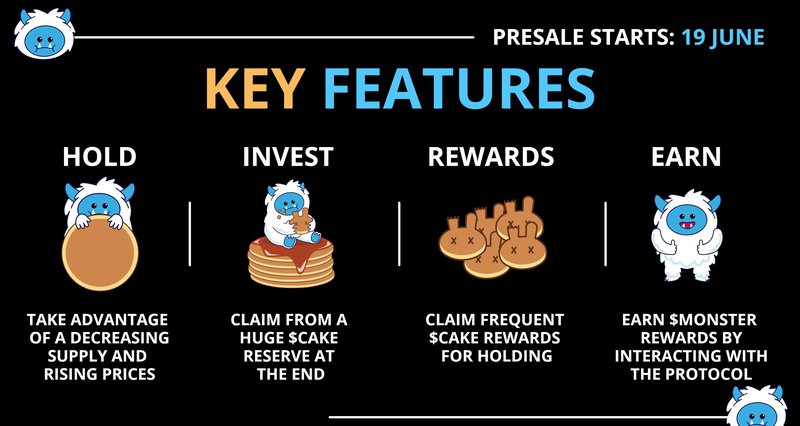 How Bank CISOs Can Respond to a Digital Hostage Scenario