An eye to the metrics for payment companies

The most important metric for payment companies is the number of transactions. Unfortunately, there is no open data on transactions, therefore, I chose the number of installs and rankings on Google Play and Apple App Store to show which company is leading. 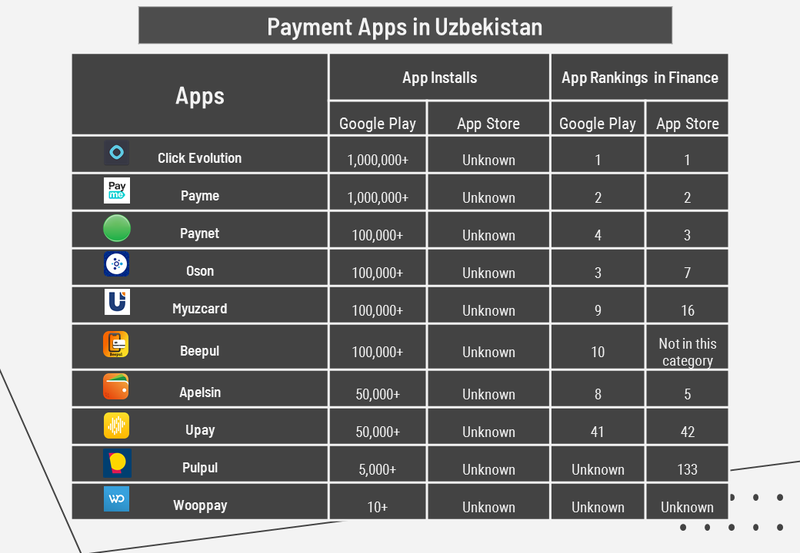 The two biggest payment companies in the fintech market of Uzbekistan are indeed CLICK and Payme.uz which have over a million installs on Google Play and are placed in the first and second places respectively on both mobile markets.

I have to mention that CLICK has three more products USSD, Telegram bot, CLICK web application except for its mobile application. We can assume that the company has the biggest audience because Payme.uz at the moment does not have USSD and its Telegram bot provides only P2P services unlike ClICK’s full functional bot with all the services.

The list is followed by Paynet one of oldest fintech companies and OSON which focus on integrating with international payment organization such as WebMoney, Qiwi Wallet, Yandex.Money and differentiates itself from competitors.

Paynet launched its mobile application relatively late before the company was very popular for its payment kiosks all over Uzbekistan but the company closed most of the points though it still has 21,000 payment points available all over the country.

Myuzcard is the mobile application of the United Republican Processing Center (Uzcard Brand). Uzcard is one of the two payment processing companies in the market, therefore, all banks and other payment aggregators from our list partner with the company.

Beepul a payment application by Beeline Uzbekistan (Veon company). It is the only telecom company that does not belong to the government and I believe it is the most innovative telecom company in the market. Beepul creates additional convenience for the users of Beeline due to its leading position the company has over 100,000 installs on Google Play but on the Apple App Store the company is listed on the business category.

Apelsin by Kapital Bank launched four months ago a relatively new mobile app in the fintech market. The company has achieved very good results due to well-executed marketing campaigns and user-friendly UI and UX and loyalty programs. I have to mention that Apelsin has slight advantages over pure payment apps because it belongs to the bank and can offer services not available for payment companies which might be another reason for apps success.

Upay exists in the market for some time however the company has just above 50,000 installs on Google Play and is below 40 in the rankings on both app markets. I think the company is focusing more on B2B.

PULPUL and Wooppay are both new in the market and belong to foreign companies. Companies are in the development and market entry stage.

Companies from the list do not have any open statistics on their website. The data is collected from Google Play, Apple App Store, and @Similarweb.

Fintech fan, product manager with a marketing and technology background. What I really love about product management is to find simple solutions to complex problems and building products for customers that provide them with incredible experiences that create lasting value. I learn and build products that create meaningful real-life interactions through technology.