A network implies distinct, individual parts working together to create something bigger

The overwhelming majority of people in the crypto ecosystem are passive investors. Other than buying and holding digital assets, they don’t add value to the networks they invest in.

I know this is because most people investing don’t think about crypto as a network they can participate in. They think about it like the stock market, where the only thing you can do as a retail investor is buy and sell.

My goal and challenge for today’s issue is to convince you that crypto is less like the stock market and more like social media, where you can participate, build a reputation, and actually add more value to the network than you extract.

Most people start on social media as a value extractor. You consume more content than you create. Eventually, or quickly, you start participating in the network by creating your own content - sharing updates, photos and videos. If you do this consistently, you start building a reputation in the form of followers, subscribers, retweets, etc. These “badges” of reputation directly correlate to your value to the network. The higher your reputation, the higher your value.

Participation (aka “reputation building”) in networks has been normalized in social media. There is an entire generation - Gen Z - that has grown up comfortable with the idea of building a career on Youtube and Instagram.

A 2019 Harris Poll Survey asked 3,000 kids across the world what they wanted to be when they grow up. Vlogger/Youtuber was in the Top 5 everywhere, and the top choice for kids in the UK and US. 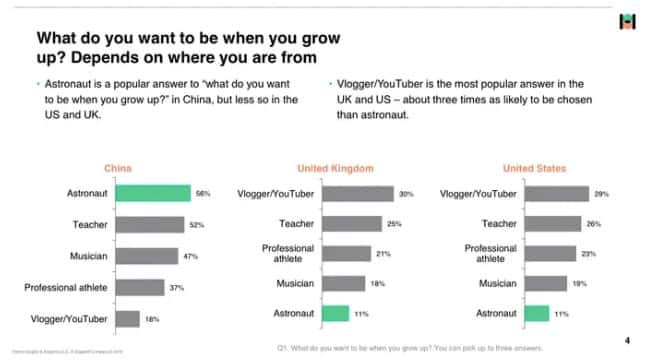 Like social media, blockchains and DeFi protocols are networks too.

Thinking about financial infrastructure as networks is a departure from how most people think about it today. A network implies distinct, individual parts working together to create something bigger - Youtube and Instagram are just the aggregate of content created by the individuals on the platform.

Today’s financial infrastructure, be it a bank, credit card processor, or central bank are centralized operations run by single companies and governments.

Your ability to actively participate in a centralized system requires you to be employed by the company running it.

However, when something operates in a decentralized fashion, it no longer operates under the umbrella of a legal entity or government. It requires a collection of independent parties (could be individuals, could be companies), working in coordination to perform all the activities previously performed by the company or government.

Bitcoin is a great example of this.

Bitcoin is a combination of a currency, a transaction processing system, and an accounting system all in one. It’s like if you combined the US Federal Reserve with Visa. The Federal Reserve portion of Bitcoin (monetary policy, issuance of new bitcoins and the maintaining of wallet balances) is managed by the protocol and a collection of nodes (computers running copies of the Bitcoin blockchain). The Visa portion of Bitcoin (transaction processing) is managed by miners.

As an individual not employed by Visa or the Federal Reserve today, you can’t participate in US currency issuance or transaction processing today. In decentralized networks like Bitcoin, you can.

The protocol and software obviously perform certain activities, but you still need people to run nodes and mine transactions. There are thousands of companies and individuals around the world running nodes on the Bitcoin network, and in the early days, there were hundreds if not thousands of individuals using their home computers to process transactions and mine new Bitcoins.

In a nutshell, the opportunity to be an active participant is one key difference between centralized and decentralized financial infrastructure.

DeFi juices your ability to participate by an order of magnitude.

But they both need the same things - a supply of dozens of different currencies, fees, and a way to manage the business.

It’s obvious how these things work for the currency desk, but let’s look at how they work for Uniswap.

Uniswap’s supply of currencies comes from users lending their own crypto as liquidity.

Fees are set by the UNI token holders and automatically charged by the protocol.

Treasury management and other aspects of protocol operations are also managed by UNI token holders.

Uniswap looks a lot like Bitcoin in the sense that the functions traditionally performed by a company or its employees can now be performed by anyone!

The importance of Reputation

Most people in crypto start out as passive investors, extracting more value from the networks than they provide. But, when you start participating - by mining or staking, providing liquidity, or participating in governance - you are not only compensated for doing that work but you will start to build credentials and a reputation.

Up until now, the reputation component of participating in crypto networks has been nonexistent.

How is someone’s reputation developed on social networks? By consistent contribution over many years, evidenced by their portfolio of content. The same is true for crypto networks, evidenced by your portfolio of transactions. Everything you have ever done on-chain is captured by your wallet’s transaction history. It serves as an immutable, chronological list of your engagement in the network over time. As your on chain activity evolves from buy/sell/trade to other types of activity (staking, providing liquidity, lending/borrowing, and voting), you start building a richer and more nuanced picture of your engagement in this new financial system.

Now the missing piece in all this is the user interface around reputation. In the traditional financial world, we have credit scores. In social media, we have follower counts and engagement metrics (likes, retweets). In crypto, there hasn’t been a tool or platform that has been able to look at everyone’s wallet history, make sense of it, and present it back to the user and network in an elegant way with the right signaling.

This is also changing. And not a moment too soon, because the way people are participating in crypto networks is evolving rapidly. There are so many ways you can add value!

Platforms like Rabbithole want to help you (a) build your reputation in this new crypto economy by developing your credentials and giving you a public profile to showcase them (similar to LinkedIn), and (b) connect you with networks that need your skills and experience. 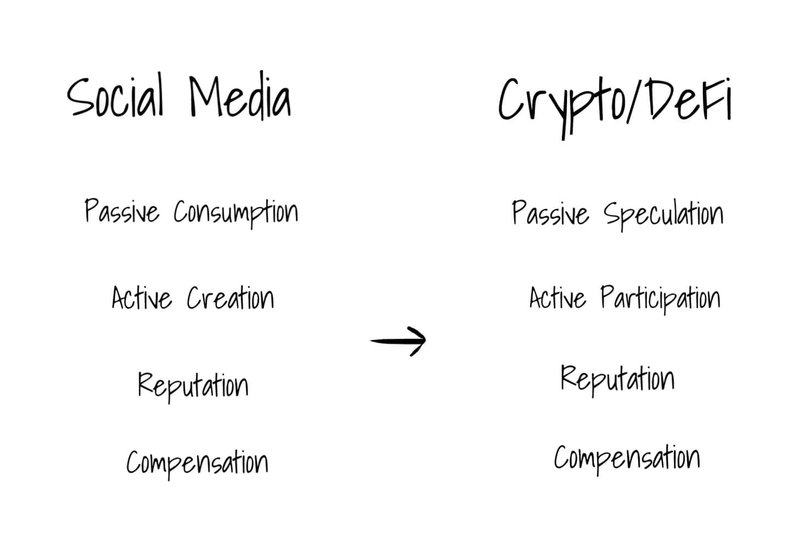 Specialization and Competition - The Evolution of Network Participation

We are in the early days of on-chain reputation, but on a long enough timeline, I believe most functions in decentralized systems will become more specialized and competitive, assuming proper alignment of incentives (you are getting paid market value for your time).

Bitcoin mining is the best example. Mining started out as something individual people could participate in with their desktop computers. Over time, it has become more professional and competitive, to the point where only large companies with giant computer farms built specifically for mining can perform this function profitably.

The management of DeFi protocols is shaping up the same way, as I discussed in how protocols can revoluzionize governance. Governance will be one of the first aspects to professionalize, and it will quickly extend to every aspect of protocol operations.

DAOs (decentralized autonomous organizations - a topic for a future issue) are so important to this thesis because they become the new framework for a group of specialists to organize and coordinate.

My bold prediction here is that crypto networks and other DAOs will be some of the largest employers of talent on the planet. Imagine working for the Internet…

This may sound far-fetched to some, but once a robust reputation system is developed, there will be social pressure to participate, and these networks start looking just like social media.

This is basically what influencers are today. They are indirectly working for Instagram and Youtube, adding value to the network by creating content and being compensated relative to the value they provided.

Cryptocurrency Going Mainstream: What Does This Mean For Fintech Today And In The Future

Deep Dive into Central Bank Digital Currencies and Their Potential

Nov. 17, 2021 • Samuel Feldman
With Crypto emerging as a major investment option and currency in the 20th century compared to traditional stocks, does the USD also need a major revamp in 2022?
Read more »

Nov. 15, 2021 • Spiros Margaris
To experience trust is to believe something is reliable and unlikely to bring us harm
Read more »