Deep Dive into Central Bank Digital Currencies and Their Potential

With Crypto emerging as a major investment option and currency in the 20th century compared to traditional stocks, does the USD also need a major revamp in 2022?

With the emergence of new technology and constantly changing user needs, the way we make payments is headed for a massive upgrade. In 2021 the majority of payments in the United States will be done online or through digital services, a significant change from just ten years earlier when most transactions were done with cash. In many first-world economies, cash is now seemingly disappearing, paving the way for a new form of payment system that is largely digital.

One such option is the Central Bank Digital Currency or CBDC. These currencies have begun to gain traction and attention to central banks and financial markets worldwide. A CBDC is a legal tender issued by a bank in a digital format. Also known as digital base money or digital fiat currencies, a CBDC is no different from hard cash, apart from the fact that they are in a digital or virtual form.

It is not meant to replace cash but to coexist as an additional form of payment method. With the advancement in cryptography and communications technology, central banks are attempting to create secure computer-code equivalents of the conventional currency that can be credited to public accounts securely and rapidly, just like conventional money. The cost of issuing such digital currencies is far lower compared to the cost of printing and distributing cash, giving central banks an incentive to pursue this project. These new digital currencies could also lower consumer reliance on cash and enable cheap and smoother international settlements and transactions while also protecting investors from the volatility of the private digital currencies operational on the internet. While this is relevant in most first-world economies, third-world countries can also benefit from CBDCs. Many people in these countries are unbanked and rely solely on cash to live off of and make transactions. While setting up the physical infrastructure for these people could be costly, establishing a CBDC can establish a direct connection between consumers and central banks and promote financial inclusion and literacy in the country's economy, as long as the people make an effort to learn and adapt to the new system.

While the concept of CBDC is still in development, it has garnered immense interest from institutions and governments such as the US, China, Sweden, and New Zealand. CBDCs can help governments better control and track illicit payments, including tax evasion, and with the quick transfer of public funds or emergency grants in a crisis situation (much like the Covid-19 pandemic). Payments made using CBDCs can also reduce the burden of settlement risk on the financial system; however, the critical success factor for the adoption of CBDCs would be its flawless integration with the existing banking and payment applications to ensure efficient operations. The digital system's simplified regulatory and managerial requirements will also help governments reduce operational and technological maintenance costs significantly.

There are two types of CBDCs in today's economy, wholesale and retail CBDCs. Wholesale CBDCs will use the existing tier of banking and financial institutions to conduct and settle transactions. CDBCs will be able to improve interbank payments involving the transfer of assets or money between two banks. Some more use cases for wholesale CDBCs could involve improving development in capital markets, enhancing cyber security, and improvement in securities trading and settlement. Retail CBDCs, on the other hand, involve the transfer of central government-backed digital currency directly to consumers.

There are two possible ways Retail CBDCs could be integrated into our daily financial lives in the near future. Account-based currencies and digital token-based currency. An account-based CBDC would work just like a regular deposit account. Much like traditional bank accounts, a user would be required to set up an account, after which the user can perform transactions, including sending and receiving the digital currency.

On the other hand, The token-based system of CBDC would involve the transfer of the currency from one wallet to another, operating like the standard crypto coins seen in today’s investments. Digital-token-based systems do not require users to verify their identity to send or receive payments; however, the transaction is approved based on public-private key pairs and digital signatures between the sender and receiver.

Here is where CDBCs can fit in the fintech creation bubble: 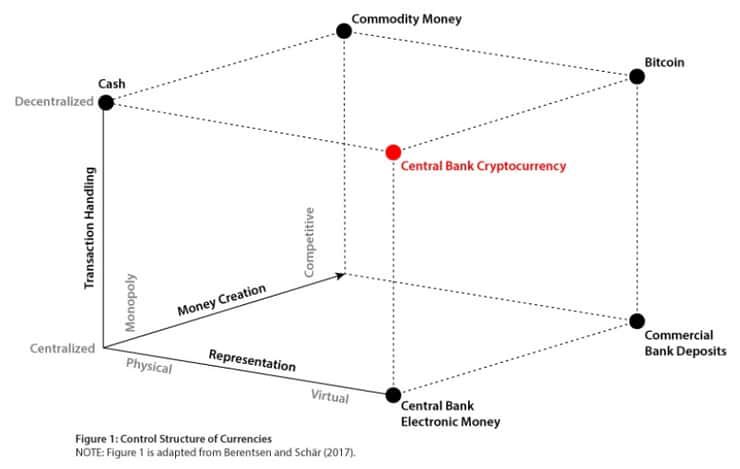 In the absence of the proper policy framework, CBDCs could potentially weaken the banking system in the long run by denying them access to deposits and revenue, causing central banks to turn into direct competitors of payment service providers. CBDCs may also provide a privacy concern for users, which could then develop into a threat from a cyber-security perspective. Further, in nations with low financial literacy, the dependence on a digital form of payment may substantially increase fraud and financial crimes. Furthermore, for an economy to depend on a virtual currency, it would require the country-wide adaptation of high-speed internet and telecommunication services. If the country's traditional currency is weak enough, the CBDC could potentially replace it as its official currency. This would significantly damage the countries economy. An example of such event could be seen with Ecuador, which replaced its official currency (the sucre) with the U.S. dollar in 2000 after high inflation forced citizens to convert their money to U.S. dollars.

Looking at the brighter side, unlike physical cash, a digital currency will be much easier and cheaper to track and eventually lead to an efficient, regulated, and legal tender-based payment system as the currency does not require serial numbers for tracking. This will save central banks a lot of money by taking away the distribution, production, storage, transportation, and disposal costs of traditional cash. It shall ensure that the transactional currency of a country remains consistent and outliers can be identified. The fear of third-party risk and bank foreclosures and liquidy will be nonexistent. An easier way to track such a currency will also assist in monitoring unaccounted money in the economy, thus potentially leading to the inclusion of more people into the taxation system. A modern digital payment system will also help settle interbank gross settlements in near real-time, avoiding the multi-day processing wait times.

Here are some more Pros and Cons:

In the long run, CBDCs could be a positive change that can help lead the world economy into new innovation and technological advancements. Although it will take years to set up efficiently, the synchronization of crypto digital tokens and CBDC’s could send fintech into the next step of its evolution, entirely away from cash and into the digital payments world. Nov. 15, 2021 • Spiros Margaris
To experience trust is to believe something is reliable and unlikely to bring us harm
Read more » Data Fabric and the Impact on Data Access for Financial Services Nov. 6, 2021 • Samuel Feldman
January's meme stock trading frenzy fueled closer scrutiny of payment for order flow. Is it about time for the SEC to ban it permanently?
Read more »