Funding and valuations for tech is declining. Even companies that had large rounds in the past are getting less and less as they move toward additional raises.

Funding and valuations for tech is declining. Even companies that had large rounds in the past are getting less and less as they move toward additional raises. 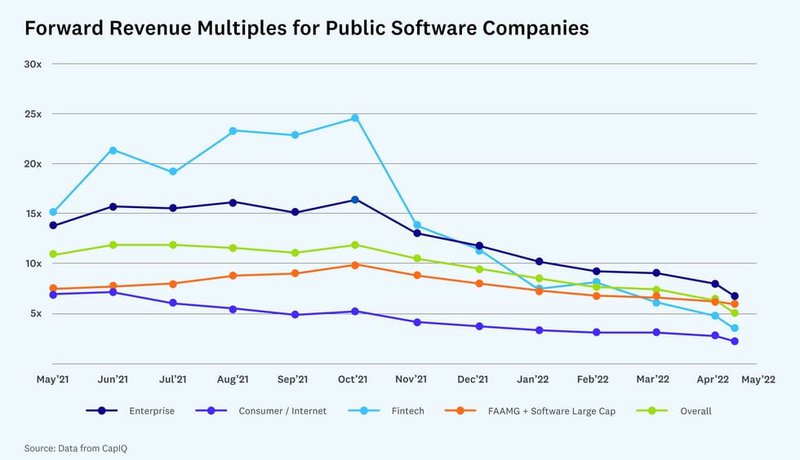 Fintech especially has taken a nosedive coming into 2022. As recession fears come into view and inflation continues to rise, some are tightening their grip on their money and preparing for what may be on the way.

This shift will likely have a quite a few impacts:

Founders will be more strategic with their spend -
I feel like this one is kind of obvious, but its worth saying because when you can raise a ton of money you are generally more willing to try things without as much data or research as normal. This in a lot of cases will be a good thing because it will force strategy into conversations where there may have been less focus on that before.

Some companies will transition from growth to profitability -
This may not be rampant in the industry overall, but there will be companies that decide to transition from an insatiable fight for market share to an intense focus on revenue and cutting expenses. This can already been seen slightly with the layoffs that have happened or are planned.

Innovation will suffer -
This is an unfortunate biproduct of not being able to fund failure. Founders being more strategic means they likely take less risk, which hurts true innovation in not only fintech, but everywhere. Innovation requires reckless abandon at times and just a passionate belief in trying something new.

Facilitators’ sales will slow -
Banking-as-a-Service (BaaS) providers, processors, consultants, middleware providers, KYC providers, etc. will all feel the slowing of the market. This funding was flowing from fintechs to all of these groups and exploding a market that had not been the “talk of the town” prior.

Fintechs will look for cost savings through transition -
Connected to the above, many fintechs will be looking for cost savings, especially in BaaS. This may not mean they will switch, but they will be playing the field to find out what pricing differences are out there and measuring that against the cost to switch.

This slow down will have a ripple effect in the industry as a whole, and the side effects aren’t pleasant. Let’s all hope that the economy can rebound quickly so we can all live in the land of plenty once again.

Financial services professional who works across a variety of companies and industries to create strategic payments advantages.  Many years of experience in managing emerging payments and digital platforms and served as a subject matter expert in tokenization, digital product management, payments, and banking-as-a-service (BaaS). Recently focused on building a robust and modern BaaS offering in the emerging US market. He also write here.

My views are my own and in no way represent the opinion of my employer.

June 1, 2022 • Ian Bradbury
The Buy Now, Pay Later (BNPL) phenomenon is the latest in a long list of attempts to challenge the status quo.
Read more »