Currently there are two financial infrastructures/systems operating in parallel, then what?

Since 2017, an institutional wave has been building in crypto. Four years later, 2021 is shaping up to be the crest. You can’t read the news without seeing a press release from a bank or fintech announcing support for digital assets.

If you don’t read the news, here’s a fairly comprehensive list of companies that have announced a crypto product or service, or purchased crypto for their own balance sheet, over the last four-ish years: 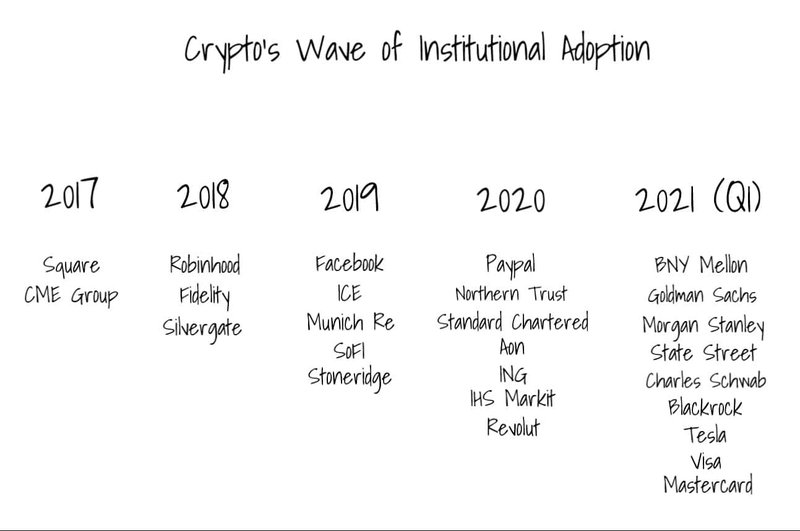 There is no question this list is powerful, and validating. But, it is a small piece of the story unfolding. This list is a symptom of something bigger.

First, let’s acknowledge current state. At the moment, we have two financial infrastructures/systems operating in parallel:

The old infrastructure/system, and the one most of the world uses, is comprised of the central banks, commercial banks and the rest of Wall Street, built on top of 1950s technology. This system is very mature. It is also brittle in the face of new technology.

The new infrastructure/system, where cryptocurrencies, stablecoins, DeFi and NFTs live, is built on top of the Internet and public blockchains. It is nascent, and lacks many fundamental components you expect to see in a financial system - government-backed insurance (FDIC), system for determining creditworthiness (credit scores), capital efficiency, etc. The utility value of this new system is increasing daily as more products and services are built on top. For a more thorough discussion of the new financial infrastructure emerging on top of the Internet, read Issue #1.

The key difference is that these two systems sit on different technology. I like to visualize this as old world (mainland) vs. new world (island). 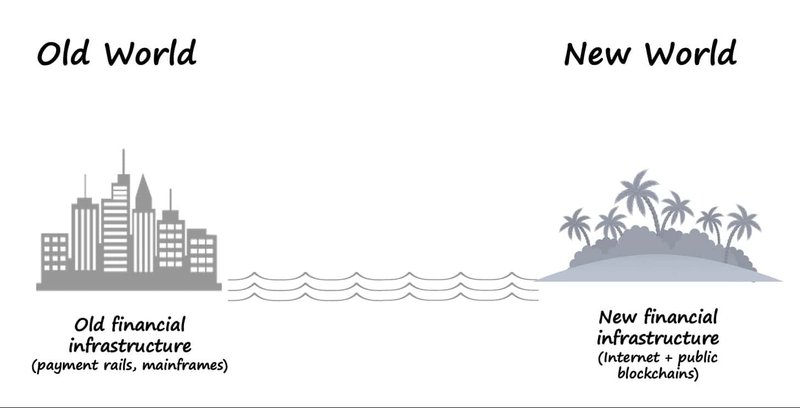 The island appeared in 2009 (birth of Bitcoin). For a few years, it was completely isolated. To those on the mainland, the island looked empty, primitive, unable to support meaningful financial activity.

In the beginning that was true. There weren’t many users, companies or rules. But over time, more users came, and more companies were built. An ecosystem emerged, and more rules were adopted.

Now in 2021, the island looks more like a futuristic city than a primitive piece of land off in the distance. There are tens of millions of users and thousands of companies. One of those companies, Coinbase, went public this month.

Financial institutions on the mainland now realize the island isn’t just an island. It is the new world, their new world, and they need to get there…quickly.

Getting to the island is the financial services industry’s top priority. They say pictures are worth 1,000 words, so here’s a picture showing the migration underway in the market.

One press release at a time, we are witnessing the largest financial technology migration in history. Both companies and assets must cross.

For companies, there are three paths to the island:

A lot of money has and will be made from the migration. The companies best positioned to capitalize are those serving as bridges between the mainland and the island.

Bridges are critical pieces of infrastructure because most assets and institutions live on the mainland. Fiat currencies, securities, commodities, banks, fintechs…they all need to migrate over, and it won’t happen without bridges.

Crypto exchanges have occupied this position for a while, serving as a bridge for fiat currency, and profited handsomely. A few more bridges are emerging… 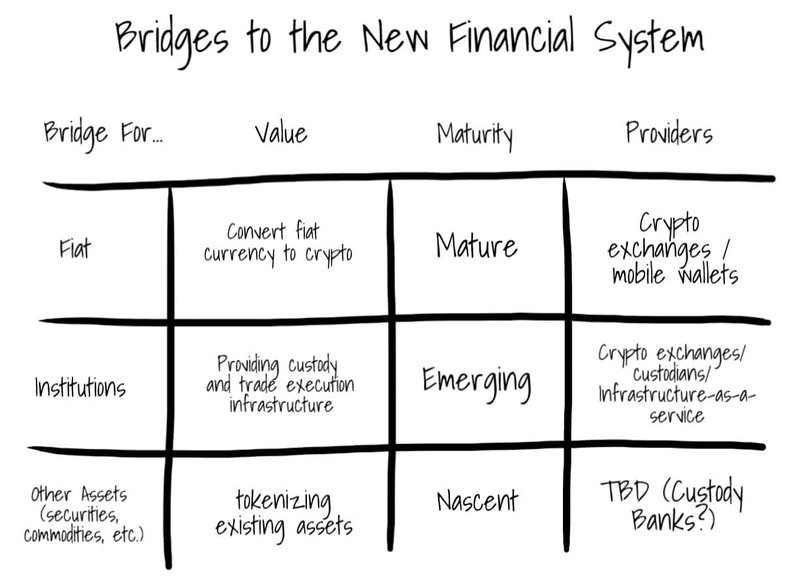 The Institutions bridge is interesting because it is being provided by crypto companies. Exchanges, custodians and infrastructure-as-a-service providers like Fireblocks want to sell their custody and trade execution infrastructure to traditional financial institutions. They want to be the crypto engine under the hoods. Does this sound like the crypto version of AWS anyone?

The fact that the new fintechs (crypto companies) are selling infrastructure to banks flips the existing vertical integration paradigm in financial services upside down, and has a huge impact on market structure long term.

For the last 20 years, disruption from Fintechs has occurred at the top of the stack, providing better user experiences and complimentary financial services (P2P payments, robo-advisors). But most of the time, if you held your money with a Fintech, chances are there was a bank behind the scenes somewhere.

The relationship between banks and fintechs is pretty intuitive when you think about. Banks were around first, so they naturally own the infrastructure. They built it! Fintechs came along later and chose to focus on aspects of financial services most easily disrupted by technology…the customer experience.

The dynamic on the island is different though. Crypto-native companies, not banks, were there first. Naturally, they own the infrastructure, and have already built similar vertically-integrated businesses on top. 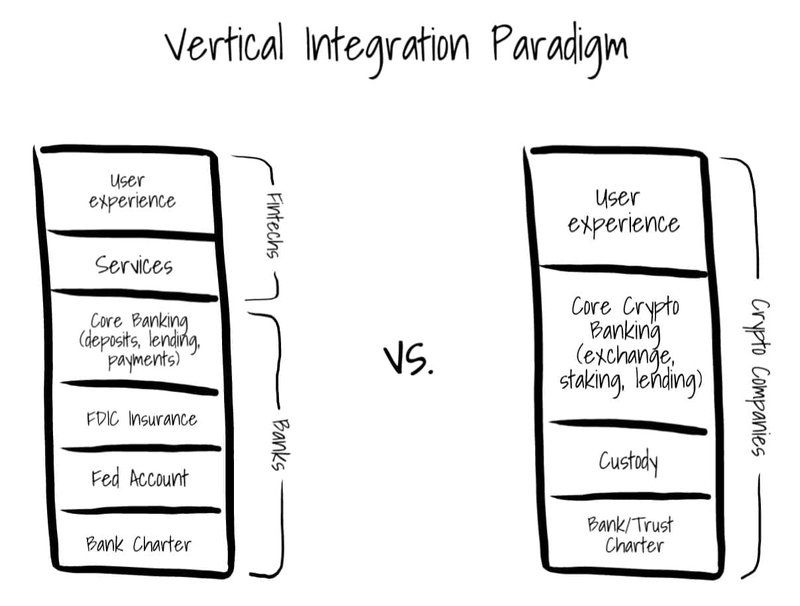 The paradigm from the last 20 years is flipped upside down. Fintechs now own the stack top to bottom. Traditional financial institutions looking to get to the island by partnering with a crypto company will be in the same position fintechs were for the last 20 years - stuck at the top.

My hunch…this migration doesn’t end well for traditional financial institutions that don’t own core infrastructure on the island (e.g. custody, trade execution). If you are stuck at the top of the services stack - owning the customer relationship and relying on crypto companies for infrastructure - you will eventually get squeezed out. Banks can’t compete with tech companies on customer experience long term.

This article was first published in Andrew's newsletter: Collapsing and Expanding - 30000feet